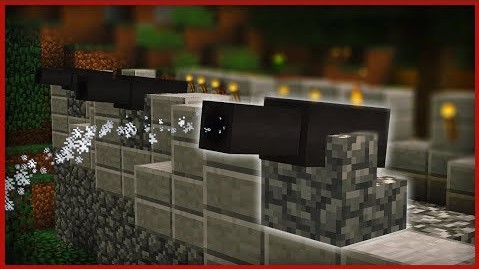 This datapack adds a working cannon in Minecraft! Build it, get ammo, aim and destroy other ships!

Create a cannon by throwing gunpowder and an iron block on the top of blackstone stairs.
Make sure the stairs are in the correct direction. But don’t worry, you can always break the stairs and get everything back.

⚠️ You cannot place cannons too near each other. There must be a distance of at least 3.6 blocks between one cannon to another. ⚠️

Throw TNT on the back part of your cannon to shoot a ball. The ball flies until it touches a block, then it blows up.

This command was originally made by me in August 2017 but was kindly updated to Minecraft 1.16 by one_nose and requested by Bruce on my discord server. Thanks a lot!

Any cookies that may not be particularly necessary for the website to function and is used specifically to collect user personal data via analytics, ads, other embedded contents are termed as non-necessary cookies. It is mandatory to procure user consent prior to running these cookies on your website.